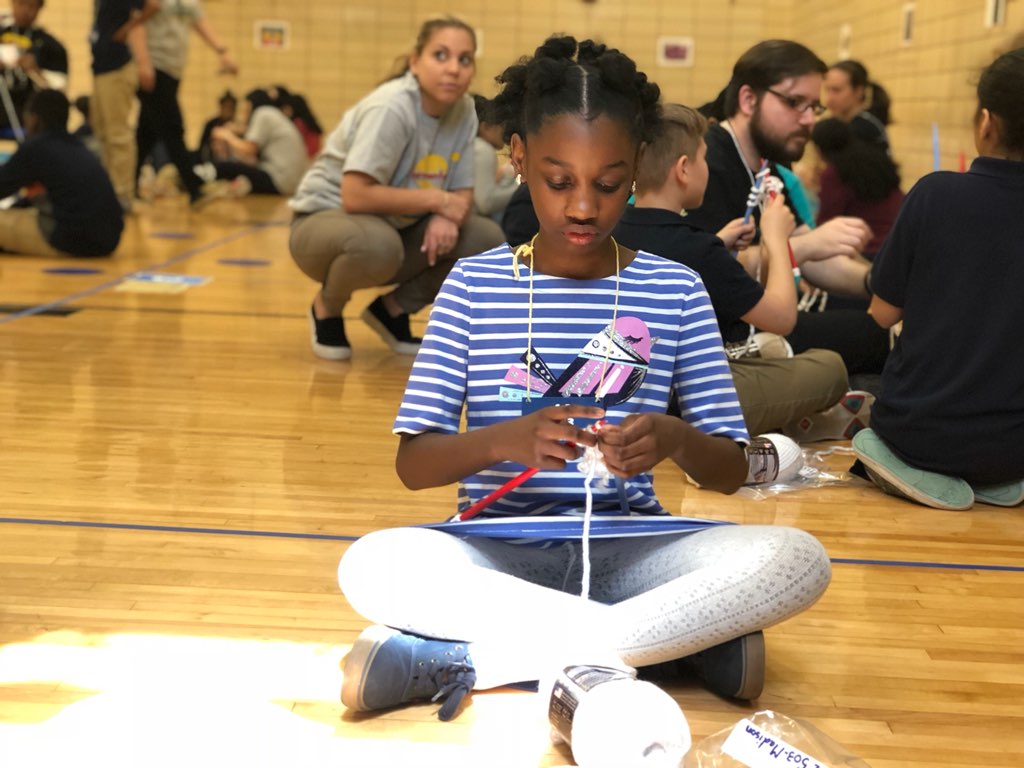 Back in Februay, we wrote about the sudden rise to Twitter-stardom of Louis Boria, creator of Brooklyn Boy Knits. At the time, he shared with us a special vision: to create a knitting class for young people. And this past Friday, his dream came to life! Thanks to a visionary principal, supplies from Lion Brand, & many other crafting heroes, Yarnementary cast on Friday at P.S. 145. A young knitter, Kai, met Louis through Instagram. Because he expressed an interested in knitting, Kai’s mom got him one of Louis’ kits. Then, she shared a photo of him in action, and Louis reached out with encouragement! “Kai reminds me a lot of myself when I was his age,” Louis says. “Kind of shy and always smiling.”

They tossed around the idea of teaching other young kids to knit, especially those who might be nervous about any stigmas around yarn crafting.

That’s how the idea for Yarnementary was born.

Louis posted about how he & Kai wanted to offer knitting classes to anyone who wanted to learn. Then, a surprise. Dr. Natalia Russo, from P.S. 145, messaged Louis and asked him to get in touch. She had a big idea: starting a fiber arts program at her school. She offered space on the weekends for Louis’ private lessons, in exchange for providing her students the opportunity to learn to knit. Their visions aligned perfectly – talk about synchronicity! With a space secured, Louis realized just how much there was left to do. He reached out to Lion Brand, and asked us if we’d like to be a part of this magical idea. We love magical ideas! We signed on to sponsor the event – providing needles and a skein of yarn to every single student in attendance. In addition, we invited knitwear designer Josh Bennett to join in the fun. Josh and Louis had both been guests on Tea with Shira, so it was only natural that she’d play a big part in the day.

The to-do list was long… First of all, the program needed a name! Then, of course, tee shirts for volunteers, so the kids would know who to talk to! Louis reached out to NY1, who were eager to cover the event, and produced a wonderful segment about the day (watch it here!).

Louis was posting constantly on Instagram and Facebook, trying to find enough volunteers to make sure each student would get all the help they needed. Since the event would happen on a weekday afternoon, many folks with full-time jobs wouldn’t be able to make it. Things were looking bleak, until Josh stepped up and make one final pitch at a weekly event called Knit@Nite. Finally, they secured the volunteers they needed! “It was so heart-warming to see all these beautiful souls commit to this vision,” Louis says. It was all coming together.

But how would it all come together?

For months, Louis ate, slept, and lived Yarnementary. “Probably one of the hardest things I’ve ever had to organize!” Louis laughs. He certainly felt the responsibility – he was determined to bring this dream to life, and felt the pressure of all these important people letting him take the lead. “I was extremely nervous putting this project together and didn’t know what to expect!” He was losing sleep. Maybe he wouldn’t he get enough volunteers. Would the kids take to knitting? How could he focus on the kids who would inevitably get frustrated, and want to give up? Students and Volunteers Crafting Together

But he made it his goal, knowing how much it would have meant to him. “I wish I would’ve had opportunities as a kid for me to explore my artistic side. Had someone come to me and said they’d teach me how to knit when I was a kid, I’d have been all over it. Offering the children the opportunity to learn how tot knit was so important for me.”

Louis knew that with the help of P.S. 145, Josh, Shira, and Lion Brand, he could get it all done. A student, modeling his bookmark!

Finally, the big day came! Yarnementary was a huge success. Smiles and excitement all day, from students who had never considered picking up needles, was all the confirmation Louis needed.

“The seeds the volunteers and I planted that day, will truly have an impact in their lives. As I scanned the gymnasium that day I saw nothing but smiles, laughter, and hugs from both children and instructors.” Over 250 students learned to knit, with the help of 27 volunteers, and many walked away with their first finished project! A knitted bookmark, made with their own hands.

Hopefully, an ongoing program that spreads to other public schools in NYC! Following the NY1 segment, Louis received an email from someone in Chicago, who’s petitioning to bring Yarnementary to their Chicago public school! Inspiration spreads easily when an idea is good, and this likely won’t be the last message of this kind Louis receives.

He’s working on getting a vendor’s license, so he can go through the proper channels to introduce Yarnementary to the Public School System. Students with their Lion Brand Yarn

Louis says, “it’s about bringing something into the children’s hands that will help stimulate their minds and creativity in hopes that someday we see future knitters, fiber artists, and maybe even one or two knitwear designers.” And for those who don’t follow in Louis’ footsteps, getting exposed to a fun and functional hobby, free from any stereotypes, is an enormous gift all its own.