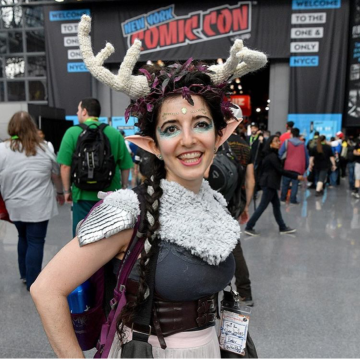 I’m a huge fan of costuming, as you can see in my various yarncrafting costume posts (including designing an octopus headpiece, turtle shell, arctic fox, and light-up wings). And so, I was very excited for the opportunity to attend New York Comic Con for the first time earlier this month. Comic Con is a pop culture consumer show dedicated to comics, video games, toys, movies, fantasy, and more. And the convention is enormous! Over 250,000 people bought tickets to attend the early October event, and many of them were dressed in costume to cosplay.

Cosplay (short for “costume play”) is the increasingly popular practice of dressing up in self-made costumes representing characters from pop culture. Cosplay is a huge part of the convention culture, and NY Comic Con even hosts the Championships of Cosplay. 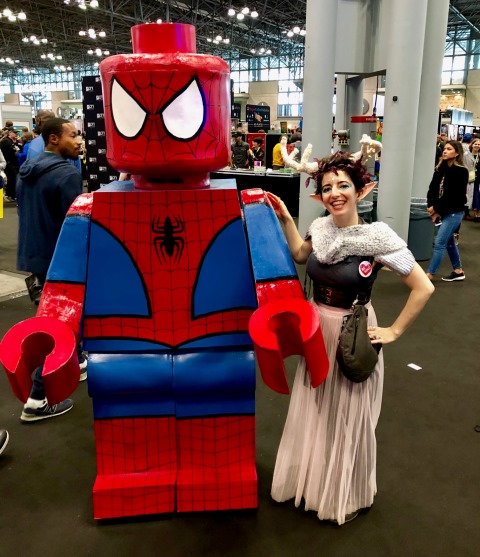 Gali with a giant Lego Man. 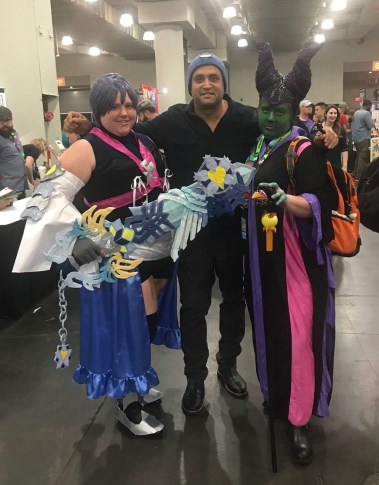 I dressed up as a horned elf, with accessories knitted from Wool-Ease Thick & Quick and Vanna’s Choice. My knitted antlers light up! And my fur collar features knitted scale mail epaulets. Yes, those shoulder armor bits are made of yarn! With small aluminum “dragon scales” incorporated into the knitting. When the official NY Comic Con Instagram posted photos of their favorite cosplayers, I was featured on their six-photo roundup for the first day of the convention! Such an honor to be selected. We include the photo here, and you can scroll through all of them on the #NYCC Instagram.

My elf ears and knitted antlers were a great conversation starter, and I was one of many cosplayers interviewed by CBS on their Facebook Live – starting at around 15:10 in this video.

While exploring the show, we spotted some knitted and crocheted items for sale, including scarves (like the super-long Doctor Who scarf, and scarves for each of the Hogwarts houses from Harry Potter – see our knit pattern and crochet pattern to make your own), hats (like the orange and yellow striped hat that the character Jayne wears in the show Firefly show) and various plushies depicting famous characters.

We also spotted a booth filled with crocheted amigurumi. The character plushies at Craftigurumi were so adorable and inventive, ranging from comic book to sci-fi to fantasy characters and more.

We were also happy to chat with Amy Reeder in the Artist Alley. Amy is a comic book artist and a knitter, and has appeared on our very own Tea with Shira. Check out the episode below and hear about Amy’s adventurous knitted creations and Moon Girl.

And here’s a yarn cosplayer we WISH we had run into – Alex is Crafting! Check out Alex’s amazing crocheted creations over on her Instagram and blog.

Are you incorporating yarn into any of your crafting for Halloween? We would love to hear about it!