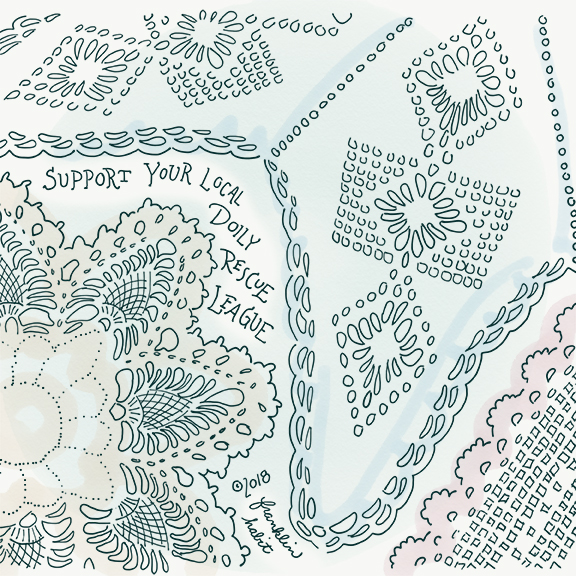 I was prowling through an antique shop in Vermont recently, on the hunt for the perfect dollhouse piano (another story); and between a shelf full of novelty salt and pepper shakers and a pile of vintage ads for milk of magnesia was a rack stuffed with old table linens and afghans.

Most agreeably disheveled, lower-end antique shops have a rack like this, or at least a basket of crocheted with a tag that says “OLD DOILIES $2 EACH.”

I never walk past these without having a good rummage. You see some ghastly stuff in there, of course. Choices of fiber and color, gauge and motif that might politely be deemed “unfortunate.” But you also find more than a little beauty, charm, and sadness.

In this shop the old linens on offer included a cloth large enough, I estimated, to cover a family kitchen table to seat six. The design and colors telegraphed that it had probably been made in the 1930s. It was cotton, pristine, with an embroidered floral border about ten inches deep, and a scalloped hem worked in purple buttonhole stitch. In five or so square inches I counted six different stitches (chain, stem, feather, leaf, satin, and french knots) surrounding passages of pulled thread work.

I checked the price.

The novelty salt and pepper shakers were priced at fifteen.

If you’re a needleworker, that jabs you right in the heart. These racks and piles always do. Because we who make things ourselves know that even the ugly doily and the hideous afghan were somebody’s darling, once. An ugly doily is still made stitch by stitch, still takes hours of concentration. A hideous afghan gave someone, somewhere, a bit of comfort in the making and a feeling of accomplishment when it popped, finished, off the hook.

The owner of the shop was not a chatty sort. Her temperament would have been better suited to extracting taxes from 18th century peasants, or running a Dickensian workhouse. But there she was, thrust unwillingly into the world of selling old stuff to tourists, so she made the best of it by following me around and offering commentary.

“That is all hand done,” she said, as I looked at the floral tablecloth.

“The ladies would all sit and do that back before there was television, there was nothing else to do so they would do that.”

I wasn’t feeling very chatty, myself, so I didn’t point out that there are millions of us who still Do That, television or no television.

“It’s all junk now, people don’t want it no more,” she said.

“Do you like salt and pepper shakers?” she said.

“Not especially,” I said.

“Yeah. I got a million of those,” she sighed.

I was in Vermont teaching knitting. In the classroom the next morning I mentioned the shop and the rack of needlework. My students got misty-eyed at the description of the tablecloth hanging forlorn and forgotten, going cheap.

Almost all of us had our own stash of family pieces, made by a late relation and unwanted by anyone else in the family. We had rescued them from the fate of the sale rack, even when we didn’t honestly have much use for them ourselves. It wasn’t necessarily about utility, we agreed, or even beauty. It was about respect.

“I have my great-grandmother’s doilies,” one student said. “And I know they’re not valuable or unusual. And it’s not like I want them all over my living room. But, you know…she made them. They’re really fine, too. They took her a long time. That means something to me.”

“I tell you what,” said another student, “and you may think this is nuts. But when I see those things in shops I always stop for a second and in my head I honor the person that made them. I mean, you make think it’s nuts, but I do it. I think, I see what you did here, and I’m impressed, and I hope it made you happy and you had a good life.”

As it turned out, many of us in the room have done the same thing.

You may be wondering what became of the tablecloth. I didn’t buy it–my city apartment is too small to serve as a National Textiles Refuge. But I gave one of the knitters directions to the shop, and she went over after class and bought it. She also bought a pair of salt and pepper shakers shaped like George and Martha Washington.

So it was a good day for everyone.