Home/CommunityFranklin Habit In Conversation With: This Unfinished Sweater 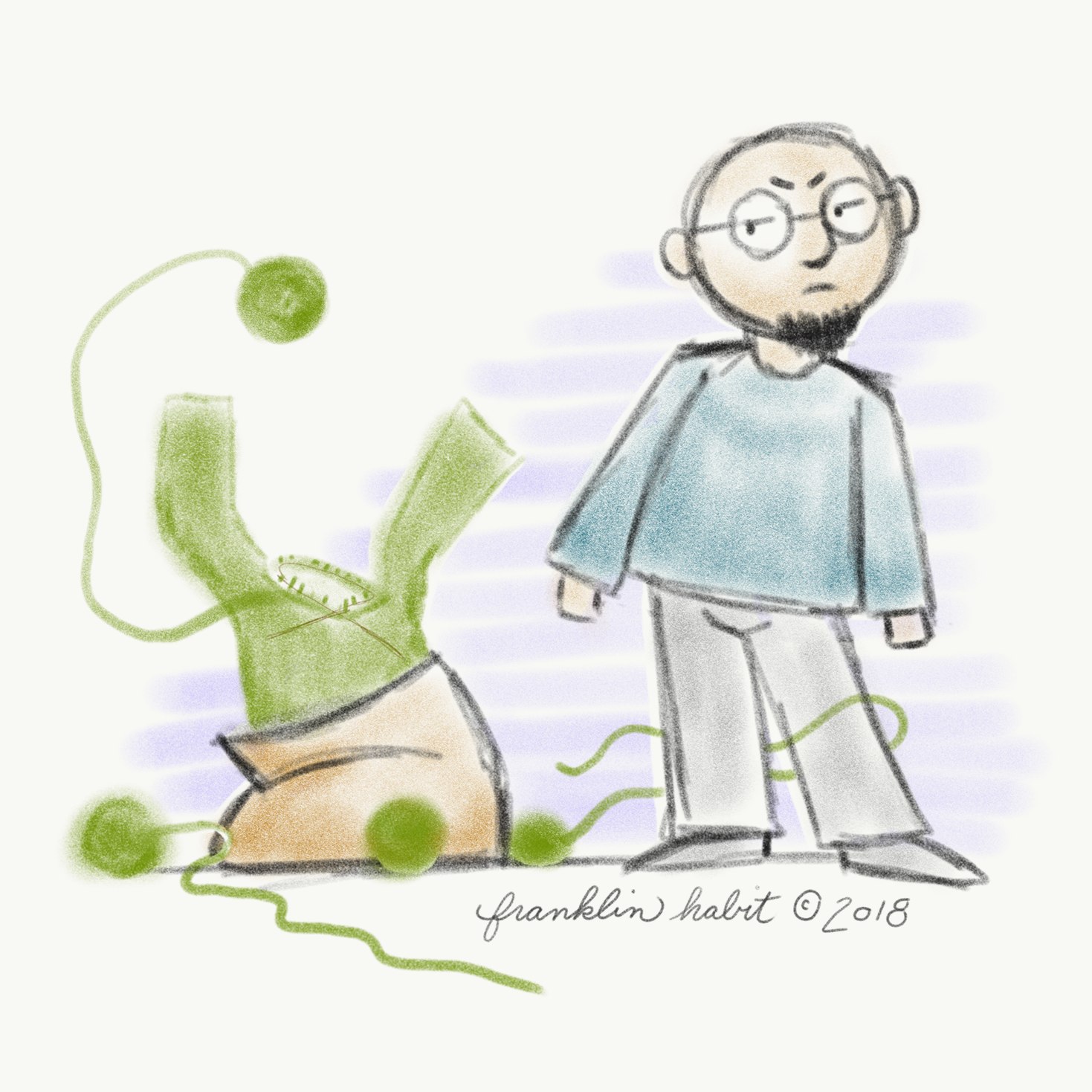 Franklin: Welcome to “In Conversation With.” I’m Franklin Habit, and today I’m joined in the studio by a sweater that I started knitting two years and two months ago; and which remains unfinished. Unfinished Sweater, thank you for being here today.

Sweater: Well, most of me is here. I’m not all here, since so much of me is still just balls of yarn.

Franklin: We usually save the deeper thoughts for near the end of the interview.

Sweater: I do beg your pardon. Terribly sorry.

Franklin: That’s quite all right. Tell us a little bit about yourself, won’t you please?

Sweater: Certainly. As I recall, you first commented on my colorway at a fiber festival about five years ago.

Sweater: And you nearly left me in booth, but that friend of yours–what was her name?

Sweater: Dolores, yes. Dolores wouldn’t stop talking about how nice I would look on you, and how there was nothing quite like me in your stash, and that really for the yardage per dollar I was a remarkably good deal. Almost a bargain.

Franklin: She was right, of course. So I went back and bought you.

Sweater: You did, and you said the absolute minute you got home you were going to swatch and take measurements and cast on. Do you remember that?

Sweater: Then I sat in the bag from the fiber festival inside a box under your bed for three years.

Sweater: I don’t hold it against you. I will say, coming out from under the bed was a shock. The world had changed so much. Everyone had smartphones. The trees were taller. Yet you still had the same bath mat and shower curtain.

Franklin: Perhaps we could move along to what happened next?

Sweater. Oh, yes. The swatches. So many swatches!

Franklin: A month’s worth, if I remember correctly?

Sweater: Easily a month of nothing but swatches. You simply could not make up your mind about me. Swatches for gauge, swatches for drape, swatches for texture and pattern. I know there were at least three cable swatches, and a very wide panel of traveling stitches.

Franklin: Still, it took me a week to decide not to use that pattern.

Sweater: Did you save the swatch?

Sweater: Then, after all that, you decided to do another perfectly plain Elizabeth Zimmermann saddle shoulder sweater.

Sweater: Not even a little textural detail on the shoulders.

Sweater: And then you did the math and cast on.

Sweater: And found out your math was wrong.

Sweater: After six inches of knitting.

Sweater: Then you started over with the correct number of stitches and knit four inches.

Sweater: And you found out you had twisted the stitches when joined to work in the round.

Sweater: So you ripped out again.

Sweater: And cast on again.

Sweater: With the incorrect number of stitches from the first attempt.

Franklin: As our time is limited, shall we move along to version six?

Sweater: Version six…was that the one where you got the rate of decreases wrong, and the shoulders would only have fit you as a toddler?

Franklin: That’s the one.

Sweater: The look on your face when you realized what you had was the talk of the knitting bag the next day.

Franklin: I imagine so.

Sweater: Especially since you had already attached the sleeves, and thought you were almost finished.

Sweater: Then there was another extended stay under the bed.

Sweater: Which I suppose brings us to today. What version iPhone are we on at this point?

Franklin: I use an Android.

Sweater: Who won the election?

Franklin: Can we talk about what’s next for you?

Sweater: That ball of wool, my dear, is in your court.

Sweater: You mean how I feel?

Franklin: No. I mean I’d like to know…how you felt.

Franklin: Thank you for joining us today, ladies and gentlemen. Please tune in next time, when a panel of experts will weigh in on whether creating an elaborate amigurumi diorama of the restaurant from “Bob’s Burgers” is a suitable occupation for a grown man.