Home/HumorGoldilocks and the Three Swatches: Another Short Yarn 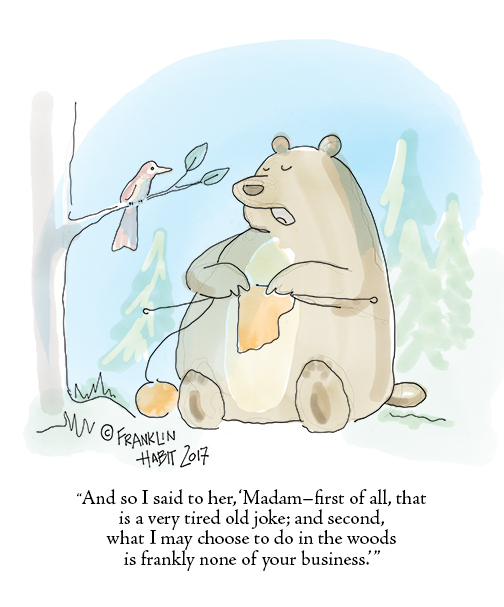 Once upon a time there was a little girl who was called Goldilocks.

Mind you, her birth certificate said Charlene; but as a mere tot she grew so enamored of her long, curly yellow hair that she to began to call herself Goldilocks. She was known to spend hours before the looking glass, stroking and smoothing her curls with her mother’s large ivory comb.

“That child needs a hobby,” said her grandmother. “Or a therapist. You pick.”

So her mother taught her to knit. She even presented her daughter with a wee knitting basket of her own, woven in wicker and painted with pretty daisies.

Goldilocks, I am sorry to say, was not only vain but also habitually disrespectful of personal boundaries. Though her basket was well-stocked, if it suited her she did not hesitate to pilfer tools and yarns from her mother’s cabinet of necessities.

When for the fourth time in three days Mother reached for the tape measure and found it gone, she blew a gasket.

“Goldilocks!” she shouted. “Have you taken my tape measure again, naughty girl?”

“Yes,” replied Goldilocks. “I was measuring the progress of my luxurious golden hair.”

“And have you finished measuring?” said her mother.

“I have,” said Goldilocks.

“Then why have you not returned it to the cabinet?”

“I was going to,” said Goldilocks. “Only I got distracted.”

“I saw a wolf in a housecoat* walking down the street.”

So outraged was Mother by this obvious fib that she ordered Golidlocks to her room for the remainder of the day, and removed the looking glass before locking the door and carrying away the key.

Golidlocks, affronted, determined that she would not gladly suffer house arrest. After pushing open her bedroom window, she clambered down the trellis of sweet peas just below and hurried off into the woods beyond the garden gate.

It so happened that in those woods there was a house inhabited by a family of three bears: a mama bear, and papa bear, and their baby bear. It also happened, and I bet you did not see this coming, that all three of the bears were knitters.

On the very day that Golidlocks fled, the entire Bear family set out for the village to visit the Wise Old Woman at Ye Sygne of Ye Twysted Skeynes to take advantage of her semi-annual pre-inventory clearance sale.

“I shall buy some lovely lace weight,” said Baby Bear, “and make myself a flowery shawl because outward gender markers are a social construct and nothing more.”

Goldilocks, meanwhile, was beginning to find her escape into the wild rather more of a trial than she had imagined. The briars caught and tore at her frock. The soft mud threatened to spoil her shoes. Worst of all, bees mistook her luxurious golden hair for an out-of-season clump of daisies and pursued her at full tilt for a quarter mile.

She was relieved beyond words to suddenly find the clearing in which sat the tidy little house of the bears.

“I shall knock at the door,” she thought, “and ask if I may borrow a comb.”

But answer came there none. She tried the handle of the door, and it swung open.

Of course the house was empty. She saw only the three chairs of the three bears, each with a neat gauge swatch in progress draped over one arm.

Goldilocks was fascinated by the gauge swatches, because of course she had never seen one.

As I have mentioned before, the girl had no respect for personal boundaries; so she picked up Papa Bear’s swatch and knit a few stitches.

“Ugh,” said Goldilocks. “This knitting is much too loose.”

So she had a go at Mama Bear’s swatch. “Ugh,” said Goldilocks. “Much too tight.”

That left only Baby Bear’s swatch. Goldilocks tried it, and found to her delight that it felt just right. She enjoyed the knitting so much, in fact, that before she knew it she had finished off the ball of yarn. Feeling quite satisfied, she bound off loosely and sat back in Baby Bear’s chair.

The quiet knitting, and the soft chair, soothed her clouded brow to such an extent that without knowing it she had soon fallen into a profound sleep.

Just at this time, the Bears were returning from their stash enhancement expedition in high spirits. Then Mama Bear, at the front gate, paused.

“Bruce,” she said, “the front door is wide open. Did you remember to set the alarm?”

“Dang it, Bruce,” said Mama, and all three hurried into the house.

“Well,” said Papa, “the television is still here. I’ll go check the safe in the bedroom.”

“Wait a minute,” said Mama. “Someone’s been knitting on my swatch.”

“That’s weird,” said Papa. “Someone’s been knitting on my swatch, too.”

“Someone’s been knitting on my swatch!” squeaked Baby Bear. “And there she is!”

Whereupon Goldilocks awoke to find three bears with paws full of yarn staring down at her in a marked manner.

“I can’t believe this is happening again,” said Mama Bear. “Another little blonde kid. It’s the porridge incident all over.”

“I told you the neighborhood was going downhill,” said Papa Bear.

“Yes,” said Mama Bear. “That’s why we got the alarm system.”

Papa Bear looked at the ceiling.

“Are we gonna eat her?” said Baby Bear.

“I’ll show myself out,” said Goldilocks. She sprang from the chair and dashed through the open door.

The Bears watched Goldilocks disappear into the trees.

“You couldn’t make this stuff up,” said Mama Bear.

Ignoring bees, mud, and brambles Goldilocks did not cease running until she reached home. Throwing herself into her mother’s arms, she apologized tearfully for having been vain and thoughtless and promised never again to think only of herself.

“My dear child,” said Mother, stroking her hair, “I am sure you are very sorry, and will always think twice before rummaging in strange houses.”

*The gentle reader is referred to the tale of Little Red Knitting Hood, to be found earlier on this very blog.