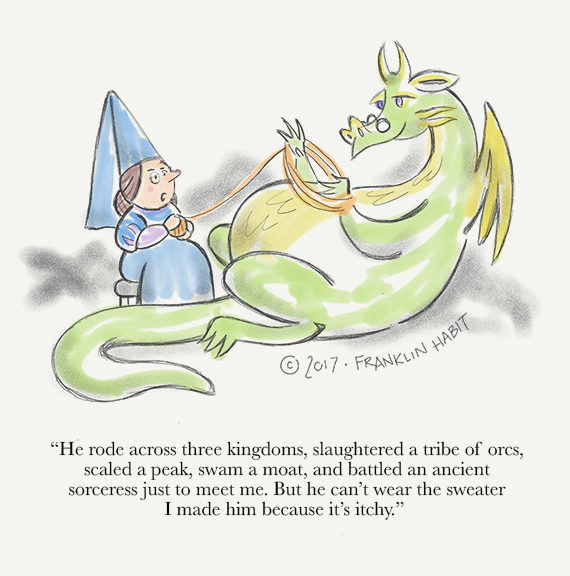 In a land far away, in tumbledown shack, lived a poor, sad mother and her young son, Jack.

Jack’s mother was one of those souls who are born, so it seems, to be miserable. Her husband was long gone–possibly to the next world or possibly to the next village, out of reach in either case. When she took to the plow, her crops failed. When she bought a cow, it ran dry. When she sat down to spin, her wheel fell to pieces.

To crown all these trials, there was Jack. The boy was the image of his father, which would have been annoying enough. But he had also his father’s wandering wits and want of ambition. When the weather was fine, he was content to lie for hours and watch the clouds float by. When the weather was foul, he was content to watch the same clouds through the holes in the roof of the shack.

He would not, despite his mother’s entreaties, go out to seek work as the other boys did.

Inevitably, there came a day when this could not go on.

“Jack,” said Jack’s mother, “We have nothing in the cupboard and nothing in our garden. Your father is gone and the cow is dead. You must take my last treasure to market it and sell it. Get a good price, my boy, so that we perhaps eat a little something in the days to come and then…well, after that I know not what.”

Mother’s treasure, kept in a battered box near the fire, was a stash of fine yarns. They were few. They were beautiful. They were all that remained of the modest dowry she had brought with her when she married.

Jack for once began to do as his mother ordered, because he’d had nothing to eat for two days and was beginning to understand the gravity of the situation. He put the box of yarn under his arm and set out for the market square in the village.

Halfway there, he passed a funny-looking woman who was sitting under an ash tree at the side of the path. She was knitting a sock, and without so much as looking up from her needles she called out to Jack.

“Young man,” she croaked, “Whither go ye with that pretty yarn?”

“How do you know there’s yarn in this box?” said the boy, stopping short.

Jack showed the old woman the yarn in the box.

“Fine goods,” she said, pulling the skeins out one by one and squinting at them through her glasses. “Wool. Cashmere. Alpaca. Silk. Lovely colors. From a home free of smoke and pets, I’ll warrant?”

“Yes,” said Jack. “We cannot afford tobacco, and even the rats have left us for want of food.”

“Mother said they must be sold at market,” said Jack.

“Bosh,” said the old woman. “I’ll pay ye handsomely, and ye can turn back to yer mother so much the faster. Her joy will be doubled.”

“That does make sense, I suppose,” said Jack.

“Of course it do,” said the old woman.

“How much money will you give me?” asked Jack.

“Money! Hah! I have here a prize far greater than common cash. What about this? What do ye think of this?”

She held out her palm.

“Those are stitch markers,” said Jack.

“Aye,” said the old woman. “Not any old stitch markers, though. These here markers, they’re magic.”

When Jack returned home and told his mother he’d traded her yarn for stitch markers, she bit her fist with frustration.

“And what use,” she said, “are stitch markers when I have no yarn?”

Jack admitted that he had not thought the matter through completely. His mother, shrieking with rage, threw the stitch markers out the window and into the barren garden. That night, for dinner, they ate dust.

The next morning, mother and son awoke to find that where the stitch markers had landed, an enormous strand of green chenille had emerged from the ground and was stretching, like a charmed snake, into the clouds.

“Well,” said his mother. “That’s it. The hallucinations are starting.” And she went back to bed.

Jack, however, was curious and began to climb the strand of yarn, hand over hand, higher and higher. Once he looked down and found that the shack was so far below him that his head swam and he nearly lost his grip.

At length, his head poked through the clouds. He was startled to find himself at the doorstep of an enormous yarn shop, which seemed to sit as firmly upon a cloud as though upon a hill. Jack had never seen the like. It was taller, he thought, than four of the village church stacked upon itself, steeple and all.

The immense door was shut, but he was able easily to slip under it and into the shop.

Jack gasped. On either side, piles of yarn rose like mountains. Against the far wall was a counter like a cliff, with a forest of towering knitting needles and crochet hooks sprouting from jars and boxes.

And behind the counter, on a stool, sat the most enormous person Jack had ever seen. She was slumped, snoring. In her lap was a piece of half-finished crochet that could easily have covered the village. Her glasses had slipped down her nose. As she snored, her curly hair billowed like sails in stiff wind, and the needles and hooks rattled on the counter.

Most wondrously, though she slept her hook was still at work, pulling up loops to make perfect stitches.

Jack froze. If he came closer, would he wake her?

“Mother,” he thought, “will never believe what I’ve seen. Before I leave I must take something to prove that I have been here.”

Timidly he pulled at a gigantic ball of bouclée. It was too heavy to budge. The needles and hooks were tempting, but high above his head and dangerously near the slumbering giant.

He was about to give up when he spotted a small sheep tethered to the leg of the table. It was gorgeous, with fleece like spun gold.

“What a gift for mother!” he thought, creeping closer.

The sheep was placidly munching hay from a manger. As Jack approached, it raised its head and regarded him with a perfect lack of interest. Then, swallowing hard, it grimaced and shook. From its backside, neat as a new-laid hen’s egg, emerged a tidy skein of yarn.

This was too much to resist. Heart pounding, he crept closer and untied the sheep from the table. The sheep gave no signs of objection, and allowed him to lead it toward the door.

But then, just as they were about to slip through the crack, the sheep let out a single, faint bleat.

With a resounding snort, the giant awoke and pushed her glasses back into place.

“Who’s there?” she demanded peering across the shop. “Hey there! Tiny man! Where are you going with my sheep?”

But she was too late. Jack, with the giant’s sheep in tow, was sliding quickly down the chenille back home to his mother.

End of Part One. Part Two Will Appear Next Month.