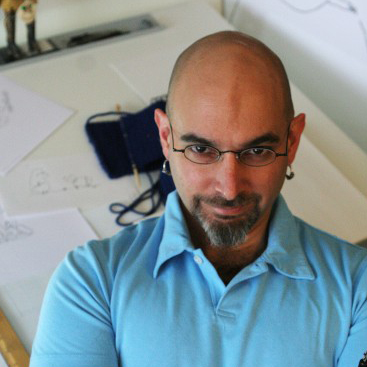 I blame it on Beatrix Potter. Specifically, I blame the library copy of “The Tailor of Gloucester” that fell into my pudgy hands when I was five years old.

That book, so far as my infantine taste was concerned, had everything. Pretty language. Pretty type. Colors so inviting I wanted to–and once did–lick them. And illustrations, wonderfully and precisely detailed, of things I loved at first sight: painted china, textiles, threads, thimbles, embroidery.

It was not only that these things were beautiful. It was that they were small. The book itself was tiny; the pictures inside, tinier still. The titular tailor was by far the least interesting part of the mix. I was more interested in the mice who took over his work. If a mouse could sit on a man’s thimble, how small must a mouse’s thimble be? A mouse’s embroidery needle? Stitches so small they could only have been made by mice? Ravishing.

It was the birth of a lifelong fascination with needlework on a miniature scale. I sometimes stop for a moment in front of jumbo stunt knitting–using broom handles or telephone poles, rope, and the like. I admire, to an extent, yarn bombings that cover bridges and buildings. I think, “My goodness, how about that?” Then I move on.

What really rivets me is the other end of the gauge spectrum, the one at which knitting needles (in America, anyhow) break out in zeroes and are sometimes made of things like piano wire or straight pins.

My own first needlework was very small. In part, that’s because it was done in secret, using scraps and oddments stolen from my mother’s ample stores. I didn’t have enough of anything to go large. But also, I wanted rather desperately to have a doll to sew for, or–greatest of dreams–a dollhouse to furnish. As a boy, however, these things were forbidden to me. Even my treasured copy of Potter’s The Tale of Two Bad Mice, bought second hand for a nickel at a library sale, mysteriously disappeared when I let it slip in front of my mother that it was a book about a dollhouse.

Now, I am a man and have discovered that one joy of adulthood is that one can, within limits, do what one wants. This helps to balance other, less attractive, aspects of adulthood such as taxes, cocktail parties, and hair growing out of my ears.

So I have bought a dollhouse–a battered and unfinished homemade townhouse from the 1910s–and over the past many years I have (almost) finished it. And what’s more, I’m knitting for it.

When I got it, the house was untouched inside. That gave me free rein to imagine what it could be. After a pair of well-dressed Edwardian bronze animals–a fox and a boxer dog–came home with me from a trip to Europe, they moved in and became Mr Foxe and Mr Boxe.

And Mr Foxe and Mr Boxe established their textile workrooms on the attic floor of the house.

They’ve been very industrious, gathering furniture and ordering wallpapers. Most exciting, though, has been working on their soft furnishings.

The present project is a counterpane for the bed. I’ve adapted a typical Victorian counterpane square–one of the dozens that begin with a poofy stockinette leaf on a ground of garter stitch–to be worked in linen thread. If you’re curious, the needles are akin to a modern US 0000 (in metric, that’s 1.25 millimeters). I pulled them from a clutch of Victorian steel needles that were given to me as a gift.

Each square is about three-quarters of an inch per side, and sixteen squares are enough for the counterpane. Those have been knit, and now work knitting has taken over while I ponder what sort of edging to knit on the squares once they’ve been assembled. This is, I realize, absolutely absurd. It’s silly enough for a grown person to play with a dollhouse. It’s even sillier for him to invest so much precious time in what goes into it. There are moments in which I pause and ask myself why I do it. What’s it for?

It’s not art. I’m not making a statement. There’s a not a child for whose delight I can claim to be doing it. It’s not practical. This counterpane isn’t going to keep anyone warm.

So, why fidget and swear (occasionally) and peer through a magnifying glass, instead of knitting a hat like a normal person?

I guess I’ve always wanted, like the Tailor’s mice, to make very small stitches. I remember looking for hours at the illustration of the mouse sewing circle inside the wall of the tailor’s shop. I desperately wanted to join them. And I suppose that longing has never gone away