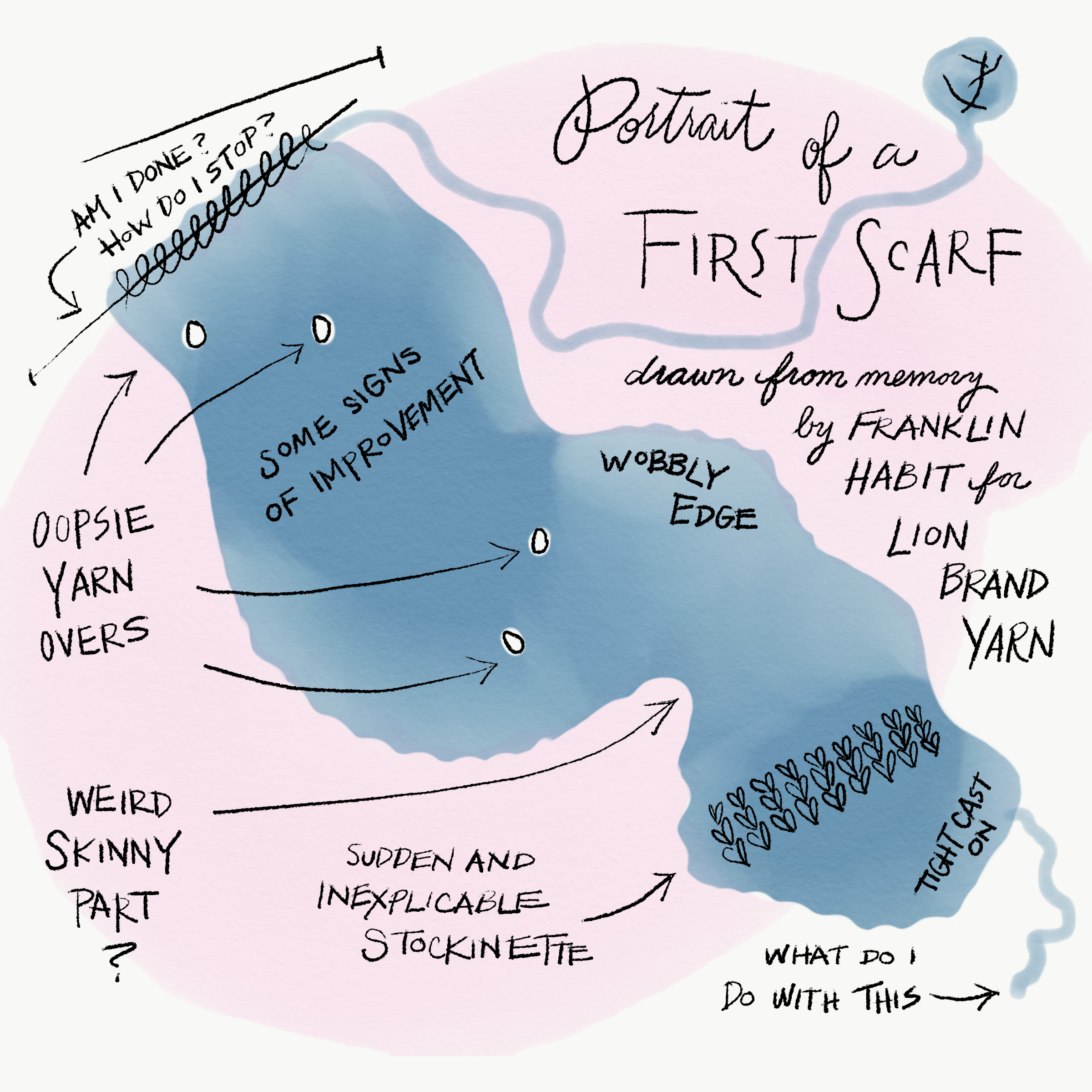 I was preparing for an upcoming teaching engagement when a file (an actual paper file–how quaint) hit the floor and the contents flew across the workroom. Most of them were what should have been in the file–class notes. But there was also a name tag, my name tag, from the first year I taught at this same event–ten years ago.

Seems it is so. I have been teaching knitting full time for a decade. That’s a significant slice of my total life span. And I was a knitter for more than a decade before that. Which means I have been knitting for nearly half of my life.

Sitting on the floor, putting the file back together, I thought about how I’ve come to take it for granted that at some point each day, I will be knitting. Okay, I might be crocheting. In any case, there will be yarn. Every day. As surely as there will be tooth brushing, lunch, or forgetting where I put my keys, there will be yarn.

It’s not that I can’t remember a time before knitting. Many of my students learned to knit as little kids, often to shut them up so mother or grandmother could get on with the housework or at least catch an episode of “Guiding Light” in relative peace.

By the time I came along, mothers had “Sesame Street,” and Big Bird taught me a lot of things, but not how to purl.

I was a college senior before I picked up a pair of needles for the first time. My first lesson was free, courtesy of a classmate who knew enough to turn out ski sweaters with patterned yokes and mittens with cables on the back.

I was already a budding eccentric, with a specialty in sepia tone quirks that would today be boringly hipsterish. I served friends tea from the china service I kept next to the fireplace in my room. I read Ruskin and cried. I wore bow ties and grew a beard. I wore a straw boater and played croquet.

When I saw knitting in progress, up close, I felt that I must try it. It was both picturesque and antiquated. It fit perfectly with the new self I’d hoped to create in the crucible of the Ivy League. I had gone in as an awkward kid from an ethnic (that was the word back then for more beige than white) working class family. I hoped to emerge, through better dress and the adoption of key manners and pastimes, as a hybrid of Abigail Adams and Oscar Wilde.

I cannot think of a dumber reason to learn to knit.

I don’t remember that I cared what I was knitting. I was enamoured of the picture of myself knitting. It went with the teapot and the fireplace.

My friend generously lent me needles, the end of a ball of brown alpaca, and her time. I cast on. I knit. I was knitting garter stitch, but did not know it was called garter stitch. I dropped stitches. I created accidental yarn overs and did not know they were yarn overs.

I had thirty stitches. Then I had twenty-seven. Then forty-three.

We were all busy little seniors, what with the usual round of classes plus the worry of What Comes Next; so I couldn’t keep bothering my friend with endless questions or appeals for help.

And I was running out of the brown alpaca yarn.

There was, she told me, a yarn shop in Harvard Square. I could go there for help, for books, for classes, for more yarn. If they had yarn and classes, I thought–I could learn to make sweaters. I wondered how many balls of yarn it would take to make a sweater. At least three, I thought.

So I decided to pay my first visit to a yarn shop.

In the meantime…when was your first knitting lesson? And where?