Home/CommunitySam Barsky: The Man of Many Sweaters 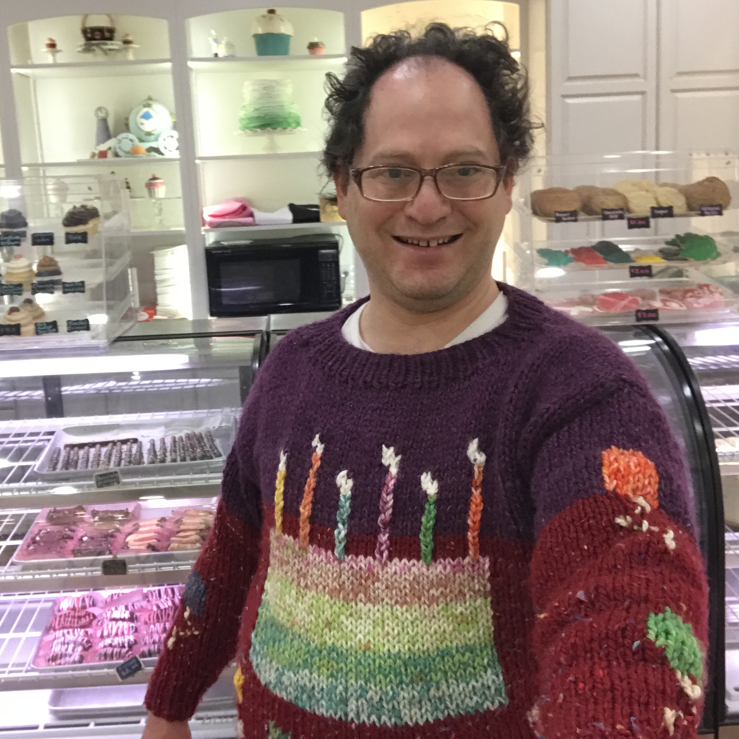 Have you ever returned from a vacation, bemoaning the fact that you forgot to buy a souvenir? Well, not Sam Barsky. Sam arrives at his destination with his souvenir on hand. Or, to be more precise, on him! Sam has achieved some notoriety in recent years for his remarkable sweater designs, depicting famous landmarks. He travels often, taking photographs of himself on location, causing quite a stir. The man of many sweaters visited recently for an episode of Tea with Shira, and brought a few of his favorite, which he made using Lion Brand yarn.

Man of Many Sweaters Sam at London Tower Bridge | Image via Did You Know?

Sam began knitting years ago, and started making sweaters almost immediately. In a video for the American Craft Council, he tells the story of how he got started. While shopping at a flea market, he found a few women selling yarn. He asked if they’d teach him to knit, and they agreed! 17 months later, he started his first sweater, and he never looked back. “Anything that crosses my eyes is a potential sweater,” he says. He works without a graph or a sketch, only occasionally looking at photos of the place he’s patterning.

Recently, he accidentally added someone on LinkedIn – a user who shared the name of a friend he meant to add. This person happened to look him up, found his website, and ended up writing an article about him! Within hours, it went viral, and many major sites had picked up the story. He’s kept knitting and traveling, but has now added teaching to his schedule.

Sam’s favorite thing about knitting for himself is that he isn’t limited to what commercial fashion puts out. As told to the American Craft Council, “I love sweaters because I can wear them, and people can see them!” It takes about a month to finish each sweater, and he’s been making them for twenty years. “Some are easy, some are very, very hard.” Urban scenes are the most challenging. For instance, a recent sweater depicting a street scene in Las Vegas. He laughs as he admits, he’s the one who chose to include all those cars! “Once we’ve planned it that we’re gonna go someplace,” he says, “I’ll try to knit as many sweaters as possible of landmarks in that place.” His sweaters bring joy wherever he travels, and he’s often photographed by tourists visiting the same location. When he visited for Tea with Shira, he told her, “I don’t own anything else. I wear them every day.” To see an archive of his sweaters, year by year, you can visit his website. He doesn’t sell them, since they’re made uniquely for himself and his travels. But he does visit places to teach knitting workshops and sweater design! He encourages crafters to knit what they love, and don’t be afraid to stray from the patterns.