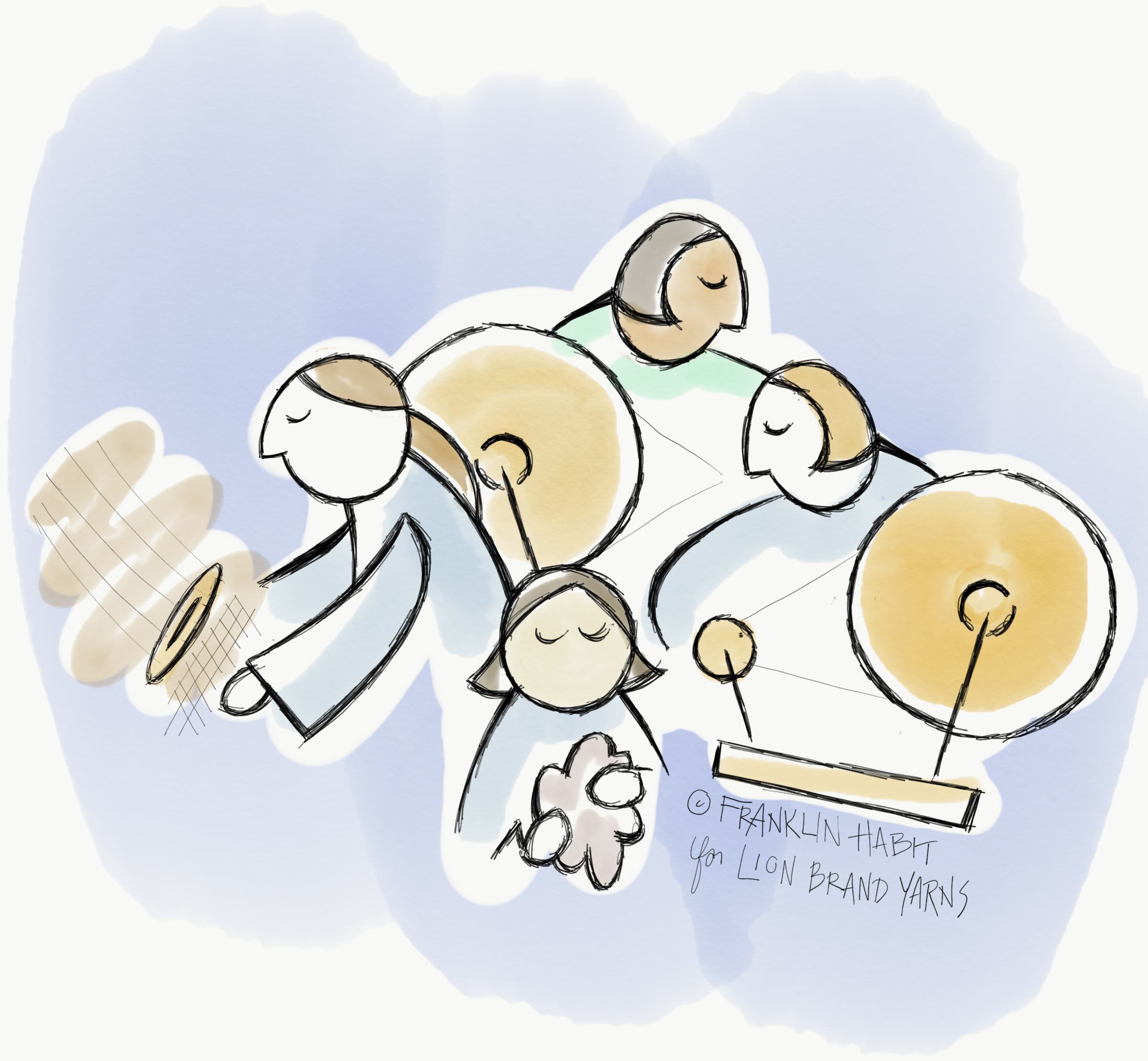 I’ve had a spell of time–an entire summer, really–where the Ugly really got to me.

That’s not quite right. It wasn’t one Ugly, it was all the Uglies. A torrent of Uglies. A cascade of Uglies.

When the Uglies rally, they form a tight circle around me and lock arms so I can’t get out. They hum, horribly, so no other sound gets in.

What does a person do when surrounded by Uglies?

In my case, the same things I do when they’re not there. I kept knitting. I kept teaching knitting. I walked the dog, bought books, made supper.

I figure I look and sound pretty normal to most folks, even when I’ve got the Uglies. But most folks don’t look or sound normal to me. They go all flat and pale, like faded paper dolls. Everything fades. Yarn. Books. Sometimes I buy more of both, too much of both, hoping to spark enough energy to chase the Uglies away. It doesn’t work.

I went for the first time to a national weaving conference. The Uglies came with me. I thought a few days in a new city, away from work, would shake them off. They met me at baggage claim.

There was a lot of cool stuff at the weaving conference. I was with nice friends, looking at pretty textiles. There were looms and books and (of course) yarns I hadn’t seen before.

People kept asking if I was having fun. I said yes. I bought yarn and books. Everyone and everything seemed further and further away. Harder to see and hear. The world was in the dark at the other end of a long tunnel, or behind dirty glass.

I left my room one day to take a look at the conference’s Sheep to Shawl competition. I had been stuck in the room for an entire day, trying in vain to sort out a major project that had gone horribly awry in my absence. I was angry. My head and back ached. I could feel that my face had frozen into a grimace.

The Sheep to Shawl competition took up one end of the market hall. This is how they work.

Competitors assemble in teams. The size of teams may vary from five members to a dozen; but they will all include some who card or comb, others who spin, and at least one designated weaver. Each team begins with a fleece, spinning wheels, and a loom. The goal is to transform the wool from fiber, to yarn, to a high-quality shawl within a strict time frame–usually eight to twelve hours of a single day.

I have taught at dozens of events that have included a Sheep to Shawl, but of course I’m always stuck in my classroom. I never get more than a glimpse of the teams at work, and I never get to see what the shawls look like, or find out who wins.

That day, still grimacing, I wandered among the teams. I felt dimly aware of clacking and whirring. My vision was foggy.

I watched two women from the Sacramento team feed their wool carefully into a wooden carder. They were smiling, focused. As the wool emerged, they encouraged the cloud off the prickly drum and passed it to the spinners. The spinners were also smiling, focused. Card, card, spin, spin. The spun yarn went onto bobbins for the weaver, and the cheerful weaver tromped and threw and beat, tromped and threw and beat.

The looms were beautiful, and so were the wheels, the carders, and the busy hands and bright eyes in calm faces. They liked each other, these women. They were working hard, happy in their work, happy to be together, proud of themselves. The whir and the clack and the fuzz and the faces and hands started to merge, until suddenly they became one thing. A ball, glowing warm like the sun, but friendlier. I could look at it and my eyes didn’t didn’t sting.

Then I was crying.

After so many months of ugly everywhere–people fighting, angry people yelling, hurt people sobbing, people shaking with worry, people shaking angry fists–here in this room, right now, women were joining together to make beauty and comfort.