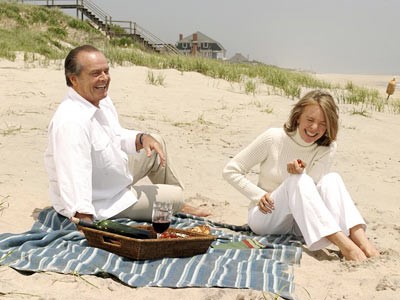 What do Forrest Gump, The Big Bang Theory, and Seabiscuit all have in common? They all include items featuring Silk City Fibers’ yarns that were knit by Judy Graham, a longtime Silk City Fibers account and owner of Topaz Knitwear. Yes, some of Hollywood’s biggest and brightest stars have graced the silver screen or appeared on television in custom-made sweaters, socks, scarves, and other knit garments made by Topaz Knitwear from yarns out of our collection. Before we tell you all about our “show business” roots, we’ll share a bit of background on Judy Graham.

Judy Graham has been a devoted hand-knitter for over 50 years and her craft has taken her down many roads. Her love of handknitting all started when she was a teen growing up in Indianapolis, IN. A chance visit to a knitting shop with her mother sparked an interest in learning how to knit.  Before long, as Judy tells it, she was knitting for everyone: her boyfriend, friends, babies, charity auctions, and bazaars.

Her interest in knitting and extensive ability encouraged Judy to open a yarn and craft shop in Massachusetts, where she gave knitting lessons, sold yarns and other craft supplies, and continued to knit.

A move to Hollywood, CA would prove to be her entrée into the glamorous world of stardom. Through a friend who was working in TV, Judy contacted a costume designer. Judy brought a basket full of her one-of-a-kind handknit sweaters, which were all quickly snapped up by the designer. Thus began her long association (40 years and still going!) with designing and knitting for movies, TV, theme park characters, and live shows.

Judy collaborated with a designer from England to create pieces for Waterworld. The women wore dresses created with Silk City Fibers Skinny Majesty Rayon Boucle yarn, and all the soldiers wore pieced garments made out of Silk City’s Softball cotton yarn. The garments were ripped, torn, and burned to give them an aged look; even with all that abuse, extensive time in the water, and many washings, the yarn and garments held up.

Ahh, Kevin Costner, it’s hard to look away from that handsome face. In the movie The Postman, in almost every scene he wore a black cotton turtleneck made from Silk City Fibers Softball cotton yarn.

Did you know that all jockeys wear a little bib under their silks? In the movie Seabiscuit, each jockey wore a crocheted bib made from Silk City Fibers 5/2 mercerized cotton.

Bernadette is wearing a sweater made of Silk City Fibers Puma Stretch. As you may know, Bernadette always wears colorful sweaters on The Big Bang Theory, all made from Puma Stretch. Judy Graham of Topaz made two of each, as shown.

Judy’s unmatched skills and love of knitting enabled her to create uniquely beautiful knitwear. When you get to know Judy as we have over the years, you soon understand how much she truly loves to knit. She is as enthusiastic today about sharing her knowledge with a new knitter as she was 30 or 40 years ago. As she writes on her website: “There is nothing like sitting down with two needles and some yarn and starting a hand-knitting project. Just feeling the yarn slide through my fingers gives me an idea of what I want to make”. Knitting has been Judy’s life’s work, and a craft she passionately shares with the world.

If you happen to visit a Universal Studios theme park, look out for Gru of Despicable Me – he’s wearing a 202-inch-long scarf made with our 5/2 Perle cotton. I’m sure we’ll appear in other movies, but until then – that’s show biz!