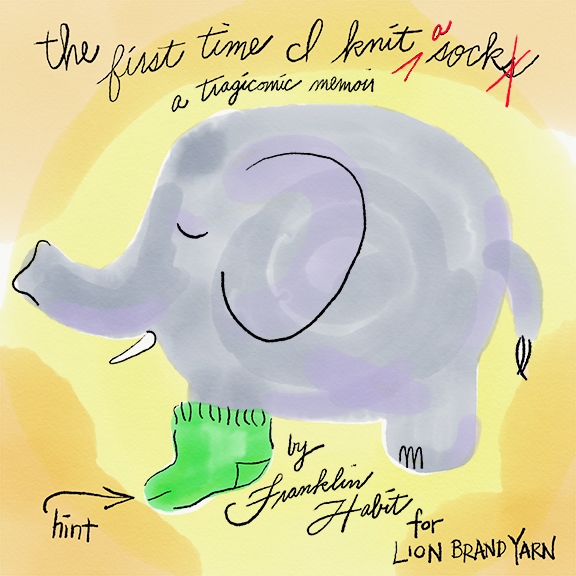 My first sock was the product of peer pressure.

I had not yet knit a sock.

Nobody who wanted me to knit socks was willing to teach me to knit socks. They suggested I take a class at a yarn shop. The yarn shops disagreed, and suggested with fixed smiles that I stick to simpler projects, like dishcloths; or perhaps learn from a book.

The pile of expensive sock yarn continued to grow.

I turned to my little row of knitting books to see if any of the authors had mentioned sock knitting. One had: Mary Thomas.

Mary Thomas’s Knitting Book (still available as a reasonably-priced reprint) is a small, mighty classic. The author, Mary Thomas (she was a real person, not a fictional figurehead like Betty Crocker) was a British journalist and nobody’s fool. Her tone in the Knitting Book very no-nonsense. If you ask her how to do something with your knitting, she’ll tell you. However, you’d better do what she says or suffer the consequences while she gives you a corrective Mary Poppins stare.

Mary Thomas’s Knitting Book had first been published in 1938. As I read her lengthy discourse on the making of socks, I thought of all the knitters I’d read about who endured the Blitz with needles in hand. Had they been knitting socks à la Mary Thomas? I was already becoming interested in the history of knitting, and I fancied the idea of making a World War II sock.

That settled it. I braved a trip to the least frightening of the three yarn shops and a set of double-pointed needles from the disapproving owner.  She shook her head, and said she didn’t think I was ready for them yet. “You’re going to be miserable,” she said, as she dropped them into a little paper bag with a happy dancing sheep on the front.

I think she expected I’d accidentally stab myself in the throat and die. They’d bury my mutilated corpse in Graceland Cemetery. She, wrapped in the fancy black shawl from her shop window, would press my mother’s hand with smug sympathy. “I warned him,” she’d say to Mother. “I warned him–stick to dishcloths.”

These were not my first double-points, but they were my thinnest by a considerable margin. And they were extra-slippery. I don’t recall the brand, and the needles themselves were long ago devoured by some couch or other. But I am sure the label must have advertised slickness as a selling point. Perhaps they were even coated with Teflon.

Mary Thomas prescribes working on three needles, knitting with the fourth. I’d knit across two of the three, hear a cheery little ding, and see the third needle on the floor.

A more experienced knitter to whom I complained said not to worry; the needles would stay put once I had worked about an inch of leg. I wondered if she would have told Sisyphus not to worry, it would all get better once he’d got the boulder to the top of the hill.

Knitting faster just made the needles drop faster. I resorted to working with the sock resting on top of a large pillow while holding my breath.

All the while, of course, I was dreading the heel. I knew nothing of how heels were worked, I only knew that many other knitters spoke of them in hushed tones. Mary Thomas went so far as to lay them out in charted form, with paragraphs of supporting text and supplementary illustrations.

I began to wonder how this had been done by the illiterate peasants in the old engravings and ancient photographs, tending sheep and children while turning heels. Where were their support pillows? How did they read the charts?

I finished the heel. I called a friend to celebrate.

“How are you feeling?” she said.

“I’m shaking and sweaty,” I said, “but it looks more or less like the one in the book.”

“Fantastic!” she said. “The rest is easier. You’ll see! Keep on going.”

“I have to wait until Tuesday,” I said.

“Because the shop is closed on Mondays, and I need another ball of yarn. I hope they have this brand.”

“I’m almost out of yarn,” I said. “I have to get more, and I guess two more balls to finish the second sock?”

“Then you should be able to get a whole pair out of one ball.”

“Did you check your gauge?”

“No. Everybody says they don’t swatch for socks, they just cast on.”

“Okay, but did you pay attention to how it looked as you worked? Does it look…big?”

“I was trying not to lose the needles! I can’t do everything at the same time!”

“Honey,” she said, “put the live stitches on a scrap thread and try the thing on before you go any further.”

I did, and felt a sense of foreboding as my foot slipped into what felt like a suspiciously saggy stocking.

Then I slipped in my other foot. And then my other leg, as there was still plenty of room.

I called my friend.

“Does sock yarn shrink to fit when you wash it?”

“Finish the sock,” she said. “Then embroider MERRY CHRISTMAS across the top and give it to a little kid.”

“I think I should stop knitting,” I said.

(I didn’t stop knitting. But that’s a story for another day.)