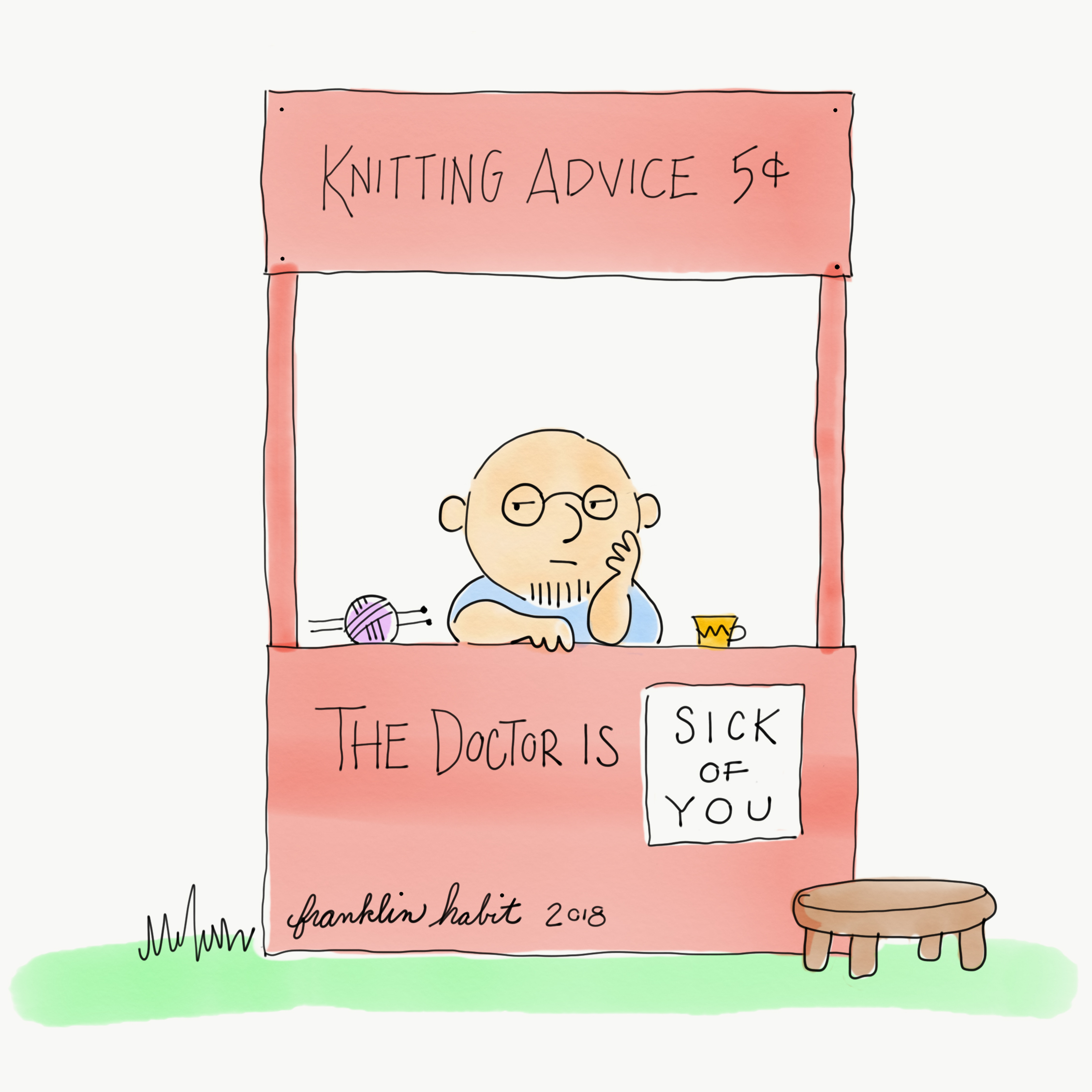 Recently a friend of mine who is not knitter (I know all kinds of people) asked if I would mind offering advice to a friend of hers, who is a knitter.

“She just finished her first hat,” said my friend, “but I guess she’s not happy with it, and she said the woman at the yarn store wasn’t any help.”

“I don’t know,” I said. “My advice isn’t likely to be any better than the advice from someone who owns a yarn store.”

“You do own a yarn store,” said my friend, indicating my apartment generally. “You just bought it a little bit at a time from lots of other yarn stores.”

“If this were a yarn shop,” I said, “you would be asked to leave the premises, and I would tape your picture to the register.”

The next day, I got a text message. I won’t tell you the knitter’s name–let’s just call her Annoying. Annoying wanted to know if she could meet with me to talk through her hat issues.

She arrived at the coffee shop about thirty minutes late, and regarded me balefully. “I guess you’re Franklin, since you’re knitting.”

She produced the it from a brown paper Trader Joe’s bag and laid it on the table.

It was about four inches high.

“It is supposed to be for me.”

“It came out too small,” she said.

I took a sip of tea.

“Do you have the pattern?” I asked. She pulled it from the paper bag.

“I did exactly what the pattern said,” fumed Annoying.

Now, who among us has not been the innocent victim of incorrect gauge? And Annoying was new to all of this, so I undertook an account of gauge that was a concise and diplomatic as I could make it.

“So I needed to use bigger yarn?” said Annoying.

“That’s where the yarn store comes in,” I said. “I’m surprised the woman at your yarn store didn’t advise you a bit better when you bought this.”

“I didn’t buy this at the yarn store,” said Annoying. “Her stuff is way too expensive. I got this at a garage sale for a dollar with the needles.”

“Ah. Well, yes–this is isn’t the right yarn. Much too thin. If you want the size to come out right, you should start with a yarn that’s about the right weight, and see what size needles you need to get the correct number of stitches per inch.”

“You mean the needles were wrong, too?”

“Well, I’m not throwing away more money on different needles. Needles should be needles.”

“But they’re not. I mean, they come in lots of sizes, so you need the size that will–”

“I thought knitting was supposed to save you money.”

“Well, maybe I can get different needles,” she said, doubtfully. “Maybe I can borrow some from you?”

“But how do I know what size to borrow?”

I explained, as gently as possible, how swatches work.

“So you knit the swatch first and it’s not anything–it’s just a swatch, and you can’t use it for anything?”

“So you waste all that time.”

“I’m starting to think it would be better to just buy a stupid hat.”

I took a long sip of tea.

“With something small like a hat,” I said, “you don’t necessarily need to swatch–you can just cast on and work on it and after a little while you should be able to see if it’s going to be way too big or small.”

“So I wasted my time anyway.”

“Not really–I mean, I would look at it like this. You learned something, and you enjoyed the knitting.”

I drained the last of my tea.

“I just wanted the hat,” she said. “Ones like this in Lincoln Park cost, like, fifty bucks.”

I stared at the bottom of my mug.

“Meghan says you love doing this stuff, so maybe you could knit it for me.”

“She says you have a ton of yarn.”

“You wouldn’t even need to buy any.”

“My calendar is really full,” I said. “And I don’t knit things to sell, anyhow.”

“How long would this take you?”

“Meghan said you were an expert,” said Annoying.

“Heck no,” I said. “I barely know the difference between a knit and a purl.”

“So this has been a complete waste of an afternoon.”

And with that, I leave you.