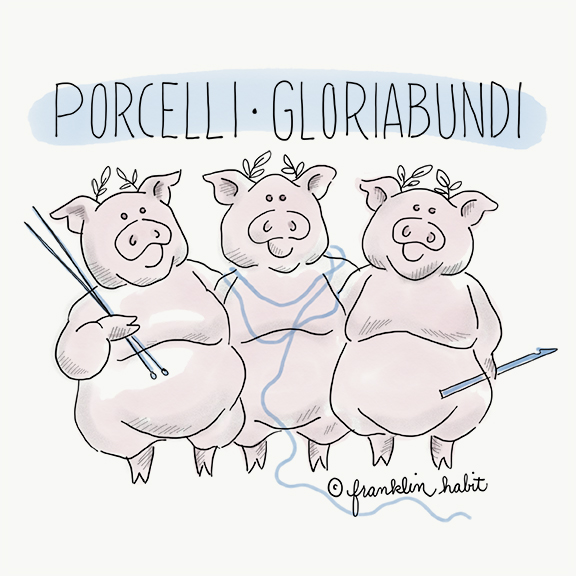 For the first part of the story, click here

The wolf crept across the lawn until he reached the first workshop.

Inside, Wilma placidly clicked her needles over the left front of a cabled cardigan.

The wolf licked his lips and tapped on the front door.

“We are not at home to Mister Pushy,” said Wilma.

The wolf opened his jaws and let fly a terrifying gale of fetid air. As Wilma’s ceiling began to fall, she grabbed her knitting bag and fled through the back door to Bertram’s workshop.

The wolf was disappointed to find nothing edible in the ruins except a box of chocolate truffles and a spilled pot of Earl Grey tea.

“Never mind,” he thought. “I feel sure the pickings will be richer next door.”

At Bertram’s, Wilma had found her brother finishing an enormous circular lace tablecloth and the fifth season of Midsomer Murders.

“Bertram,” she said, “we have got a wolf on the lawn trying to break in and eat us. We must remain calm and send him packing. We must not panic, Bertram.”

“I have never yet had a panic in my life,” said Bertram. “And I do not intend to begin now. Have you got your needles with you, Wilma?”

“And I have my hooks,” said Bertram. “We shall be fine and dandy.”

“Open studios on Saturdays only,” said Bertram firmly. “Go away.”

“Then I’ll huff and I’ll puff, and I’ll blow your house in!” bellowed the wolf.

Bertram and Wilma had anticipated this. By the time Bertram’s magnificent crocheted studio walls collapsed in a sparkly heap, the pigs had already sought refuge with Hamish.

The wolf was annoyed to find nothing much to eat in Bertram’s workroom, aside from a partial bag of mini-doughnuts and a bottle of orange soda. He was ravenous. He was furious.

The three pigs convened underneath the largest of Hamish’s sixteen looms.

“He’s very likely going to blow the place down,” said Hamish. “That much we know. The question is, how do we stop him from eating us? We must plan. Happily, I have my project notebook and calculation worksheets.”

“I’m not sure we have time to make notes, Hamish,” said Wilma.

Indeed, the wolf was already pounding on the door.

“Hamish,” said Bertram, “what’s the strongest yarn you have to hand?”

“I might try it someday,” said Hamish. “And they were on sale.”

“I say we grab a cone,” said Bertram, “and make this smug beast something special.”

The wolf, meanwhile, was pacing up and down the lawn wondering at the sheer lunacy of the situation. They were pigs. He was a wolf. He was there to eat, they were there to be eaten. Why resist the inevitable? Why defend themselves with flimsy bits of knitting?

Or was it bits of crochet? He never could tell the difference.

It was ridiculous anyhow, little pigs making things. Pigs were food. Encouraging them to be anything else was a waste of time. It gave them funny ideas.

He looked up at Hamish’s beautifully woven workshop. He drooled.

The wolf charged across the lawn, a fresh gust of wind at the ready. The front door opened–and out spilled the pigs, screaming and brandishing cones of yarn.

Wilma made the first volley, pitching her cone over to Bertram. The wolf smirked as it sailed passed his head, trailing a strand of cotton.

“You’re going to save yourselves…with string?”

Bertram yelled, “Catch, Hamish!” and tossed the cone past the wolf, narrowly missing his left ear. Hamish caught the cone and threw it over the wolf’s shoulder to Wilma. Round and round the pigs passed the yarn, over and under and through.

Then he realized to his great discomfort that the trails of yarn from the flying cone had begun to form a web, with himself caught in the middle. He raised his claws to scratch away the encroaching fibers, but found they could scarcely move. He opened his mouth to bellow, and Wilma stuffed her knitting bag into it.

The pigs pulled the yarn web tight and the wolf toppled to the ground in a neatly wrapped bundle. Hamish and Wilma sat on him; while Bertram slung his speediest hook to create, in short order, a neat crocheted receptacle of just the right size. The pigs slipped it over the wolf’s recumbent form and pulled the drawstring tight.

“A little tight in the shoulders,” said Hamish, “but otherwise quite a good fit.”

“What shall we do with him now?” said Wilma. “I don’t like him as a garden ornament, and he’s useless for anything else.”

In the end, they decided to take him to the post office and mail him to the remotest island anyone could think of, postage due.

The island refused the delivery, of course; but what became of the wolf after that is anybody’s guess. If anybody cared to guess, which they did not.

The pigs, meanwhile, went merrily back to work.

And they never forgot, as indeed we never should, that while one strand of yarn may be easily broken, many little strands working together are more than a match for even the nastiest beast.