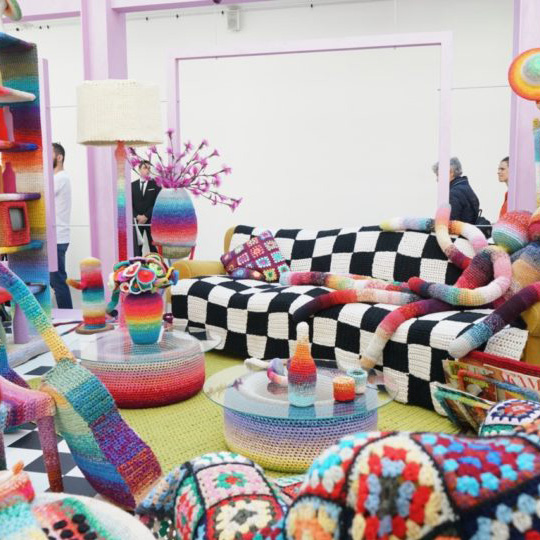 A 94-year-old woman has spent much of her spare time over the past eight years crocheting plastic bags into sleeping mats to distribute to an international humanitarian relief organization so that underprivileged people can have a dry place to sleep.

Viral crochet sensation Jonah Larson gave a demonstration recently, and a special 360* video was recorded, offering a unique view of the process.

Jonah also brought his crochet fame to the Today Show, where he discussed his newfound celebrity status, and a super cool “crochet utility” jacket he worked with a clothing designer to create.

An Australian lifestyle columnist declares “the elevation of craft is the antidote to fast fashion we need,” and that an increasing interest in artisanal crafts among luxury fashion houses is part of a renewed focus on showcasing talented craftspeople.

A new baby wrapped in a knitted or crocheted blanket is an image as old as time. When Prince Harry and wife Meghan introduced the newest royal baby, Archie, to the world, he was wrapped in a blanket by
G.H. Hurt & Son, the same English family company who made blankets for each of Prince William and Kate Middleton’s children when they were born. Baby Archie also wore a sweet knitted cap.

Every baby was a royal baby at one California hospital the day the Duke & Dutchess of Sussex welcomed their new addition. One nursed crocheted tiny crowns for each of the nine new babies born on May 6.

Home Is Where The Crochet Is

An entire home made of crochet? Sounds like a dream come true, and Missoni made it happen with the help of masterful crocheter Alessandra Roveda.

A Dallas grandmother thought something was fishy when she discovered a bin full of luxury yarn at a local thrift store. After a little digging on social media, she discovered she’d uncovered $65,000 worth of luxury alpaca yarn that had been inside a stolen trailer, and was able to get it back to the company it belonged to.

A group of politically-minded knitters came together and knitted Supreme Court Justice Ruth Bader Ginsburg an elegant gold lace collar to adorn her official robe, and she was so touched by the gesture she assured them she would wear it on her last sitting period of the current term.

New Yorker of the Week

A New York City high-schooler earned the title of “New Yorker of the Week” for his handicrafts. After he took up crochet at a young age, he decided to share his skills more broadly. Together with his sister, they created a nonprofit program that teaches others to crochet and loom, and helps them sell the completed projects. The program helps underprivileged families earn extra income, meet new people, and plant the seeds of entrepreneurship.

Telling it to the Times

An 82-year-old grandmother submitted a letter to the editor of the New York Times in response to an op-ed that mentioned “abandonment of the domestic arts,” and says she’s been knitting for her family for more than 60 years. Her reason: it makes her feel useful and creative, and “less like a boob tube idiot,” which might be our favorite reason yet.