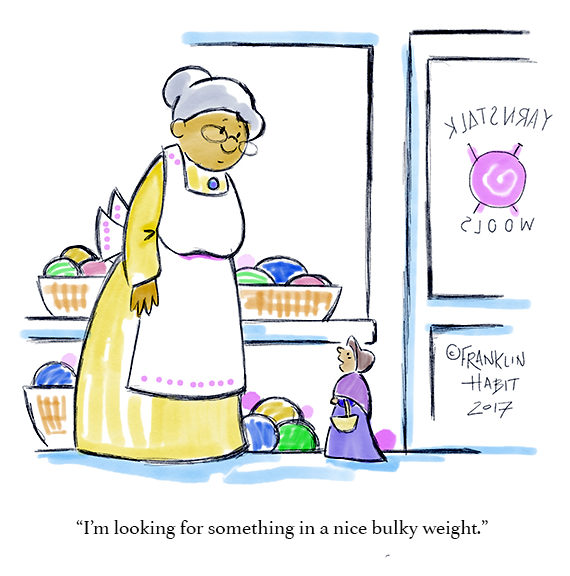 Continued from Jack and the Yarnstalk: A Slightly Longer Yarn

Jack proudly presented his mother with the stolen sheep. Her delight was, at best, moderate.

“She’s a nice enough little thing,” said his mother. “But we have no ram, and I have no spinning wheel; so I shall sell her come next market day and she may fetch a fair price.”

“No, mother!” said Jack. “She is wondrous. You must not think of selling her. Here, I’ll just feed her little bit of hay and you shall see what she can do.”

The sheep munched and swallowed. Then, turning pink about the face, it deposited from its other end a neat skein of yarn upon the grass.

Within weeks, the tumbledown shack had become the most popular yarn shop in the valley. Jack’s mother opened the door each morning to an eager crowd clamoring for her wares. These surpassed all others for quality, beauty, and variety. Weavers fell over each other to lay hands on her fine, strong linens. Embroiderers gasped at the sight of her smooth, lustrous silk threads. Those who knit and crocheted filled their baskets with heaps of her wools, miraculously soft and colorful.

“How does she find the time to spin and dye it all?” they said to one another. “Well, ’tis no matter. At these fair prices, I’ll not ask too many questions.”

Jack’s mother prospered. She bought handsome new premises: a fine shop on the best street in the town, with spacious apartments above for herself and her son. Yet she was not content.

“If one sheep brings in such cash,” she said to Jack, “imagine what we might do with two. You must climb the chenille, boy, and fetch another. A ram this time.”

“No, mother,” said Jack. “There was only one sheep. We must be content with what we have. Are not our lives now perfectly comfortable?”

“What else did you see up there?” she said. “There must have been other wonderful things.”

So Jack told her, again, of the immense yarn shop in the clouds. Of the mountains of yarn, the shop counter like a cliff, and of the giant asleep over her enormous piece of crochet.

“This hook of hers,” she said. “You saw it move while she was asleep? Are you quite sure?”

“Indeed,” said Jack. “Her snores were like the winds of March. She was fast asleep. Yet the hook moved on, and the crochet grew.”

“I must have that hook,” said his mother. “You must steal that hook, and bring it here, and we shall set it running day and night. It will make us shawls and hats and all manner of fine garments. Why should we sell only threads and yarns, when we might also sell goods made from them? I expect even the queen would give us custom.”

“Could not we ourselves learn to crochet?” said Jack.

“Don’t be daft,” said his mother. “You haven’t the brains and I haven’t the patience. Now go, and don’t come home again without that hook.”

Jack’s heart was troubled, but he dared not refuse. He returned to the yard by the tumbledown shack and there was the enormous strand of chenille, still swaying gently as it stretched up into the clouds.

He climbed, and climbed, and when at last he reached the giant’s yarn shop he was both pleased and sorry to see that the door stood wide open.

Over the sill he crept, and into the shop, where everything was much as it had been before. Past the piles of wool and silk he saw, far away, the giant–once again asleep behind the counter, once again with her crochet growing steadily although she snored. The hook moved in, down, around, out. In, down, around, out.

How was he to steal it from the very lap of such a fearsome giant?

He moved closer, and closer still, until at length he reached the hem of her skirts. He might climb up them, he supposed. It would be no more difficult than climbing the chenille. Then he would grab the hook, and then…well, after that he would see what he would do.

He grabbed a fistful of the giant’s skirt, and heaved himself up. Then another fistful, then another…

The giant woke up, snorting.

She leapt up, shaking her skirts. The crochet flew off her lap and poor Jack was flung to the floor. He was dizzy from the fall, but the crochet hook by happy chance had landed nearby. He grabbed it and, throwing it over his shoulder, ran for the door.

“YOU!” screamed the giant. “YOU AGAIN? WHERE IS MY SHEEP? HOW AM I SUPPOSED TO RUN A BUSINESS IF PEOPLE KEEP STEALING THINGS?”

Jack stopped. He had not considered that side of question.

“I’m so sorry,” he said. For he truly was a good boy, if somewhat dim.

“And my sheep?” said the giant. “What about my sheep?”

“Ah,” said Jack, “Well. Yes. That’s a little more difficult. You see, we–my mother and I–that is to say, we have grown rather…dependent…on her. We sell her yarn, you see…and well, now we are able to have three meals a day, and we have left the shack and live in town, under a roof, and our shop is always full to bursting with such happy people.”

This gave the giant pause. For she truly was a good giant, if somewhat large.

“And I suppose it was your mother who told you to come back and get that hook?” she said.

“How did you know?” said Jack.

“Owning a yarn shop,” said the giant, “teaches you a lot about human nature.”

The giant decided to send Jack home with the hook–she had dozens more–and a few skeins of yarn as well. And she bid him keep the sheep, as well, provided he promised to tend to it lovingly. Mother, I scarcely need tell you, was delighted to hear all this.

A week later, Jack reappeared at the door of the giant’s shop.

“What does your mother want now?” said the giant, after he had woke her up with a tug at her skirt.

“I come of my own accord,” said Jack. “I wonder if you might please give me a lesson in crochet. I have brought money and I shall pay well. I have asked mother to teach me but she says I am too thick to learn.”

“She must be such a joy to live with,” said the giant.

So Jack and the giant sat down together and Jack was initiated into the pretty mysteries of crochet. One lesson became two, then three. Then every other day saw Jack climbing the chenille to learn a new stitch or construction, or to seek help with a pattern. He became the giant’s best customer. Then, surely as a one more wrap changes single to double, Jack and the giant became friends. They had much in common, after all–not only a love of yarn and crochet, but also of naps in the morning, afternoon, and evening.

Down on the ground, Mother’s business prospered. Customers flocked to the shop in such numbers that soon she was able to hire a dozen assistants to see to them all, while she retired to an easy chair in the corner and watched them work. The sheep and the hook worked, too, day and night.

But she herself grew idle. She declined to touch hook or needles, wheel or spindle. She only sat in her chair, complaining of terrible ennui and a lack of patience. At last, after many weeks of never moving except to voice her discontents, she turned into a lump of stone, and was heard no more.