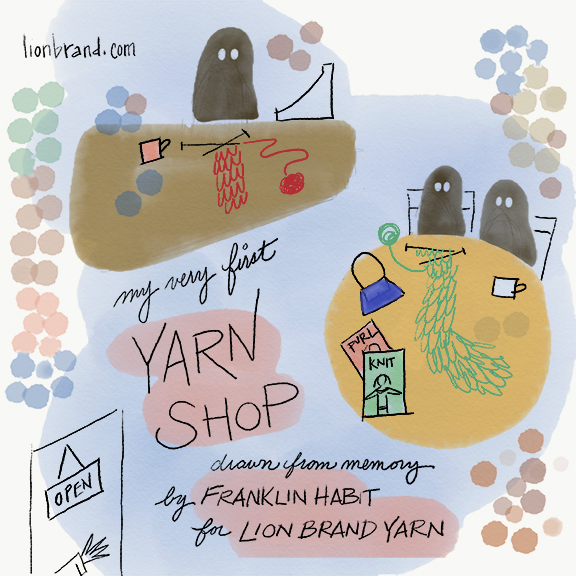 (In which I continue the reminiscences that began here.)

At nineteen years old, I stood at the door of a yarn shop for the first time.

I was alone. I had put on my best hat and coat and my good shoes. It was a short walk to the shop from my room in Lowell House; but to work up my nerve I walked around the block three more times. I asked myself whether I truly wanted to keep knitting. I asked myself whether I really ought to spend any money on a new hobby. I rehearsed what I would say, after a stealthy look around.

Then, at last, I grabbed the handle of the shop door and pulled. Nothing.

The windows were dark. Were they closed?

I pulled again, harder. Still nothing.

So I threw all my weight into it–grunting–whereupon the door shot open and I bolted forward with the grace of a seagull being sucked into a jet engine.

It was dark in there, like a mausoleum. Can it really have been as dark as that? It seemed so. For a moment the whole room spun around–a cyclone of hanks and samples–and then the spinning stopped.

I was in the middle of the shop.

There was a wooden table, with two people seated at it. And a counter, over there, with a person standing behind it. They were all looking at me. It was dead silent.

The shop wasn’t dusty. There were no cobwebs on the ceiling or dead beetles underfoot. Yet I had the strong feeling of having stumbled into a forgotten, forbidden place. Everything had a sense of permanence, of timelessness. The people at the table might have been there since the shop had opened. They might have been there, for that matter, since the nineteenth century, or at least the nineteen-fifties.

“Yes?” said the person behind the counter.

Why can’t I remember faces? Nobody in this memory is a complete person, with a nose and hair and clothes. Instead I see them all as shapes, dark shapes, looming.

The shapes at the table were still looking at me.

Clearly, I needed to respond to the shape behind the counter, so I said, “Cough cough hi um yes hi um I um I am learning to knit, I mean I need to learn to knit, please, so cough cough I learned a little bit but I want to learn more, so um please…”. Then my voice dried up.

“So um, cough cough my um friend who was teaching me, she said come here and ask about classes and, um, yarn.”

My blood was rushing in my ears so that I could barely hear my own voice. I imagined running out the door and pretending none of this had happened. Nobody would ever know.

I said I’d done a simple scarf, but I wanted to knit–well, everything. Anything. Mittens. A sweater? I would certainly like to make a sweater. Certainly, some day, a sweater.

“Do you think I could learn?” I said.

The table shapes quivered briefly, like fallen leaves on the lawn.

I remembered to ask about classes. I said,

“Should I take a class? Do you have classes?”

“Well,” said counter shape. “We do have classes. But we don’t really have classes for you.”

I blinked. She blinked.

“Could I…can you learn from a book?”

“Do you have books?”

This meaningful dialogue seems in my memory to have gone on for hours. But it could not have been more than five minutes before I was  pushing (hard) on the door to get back into the daylight and the open air. I had a bag, and in the bag were skeins of worsted weight blue wool, expensive enough to eat half my student aide paycheck for the week. I had a circular needle, suggested by the counter shape, which I now know to have been of a gauge wildly inappropriate for the yarn.

And there was a book on the basics of how to knit–pastel cover, large, floppy, and at first glance utterly impenetrable.

Walking home a few words from the book flashed in my brain. Pick up and knit.

Pick up? Pick up what? What did that mean? How? Why couldn’t I have taken a class? Why had I wasted all this money?

Clearly, I was never going to understand this book.

Meanwhile, where did you first buy yarn? Do you remember?

Stay tuned for the next piece in April!