Home/FictionThe Princess and the Purl, A Yarn in Two Plies: Ply the First 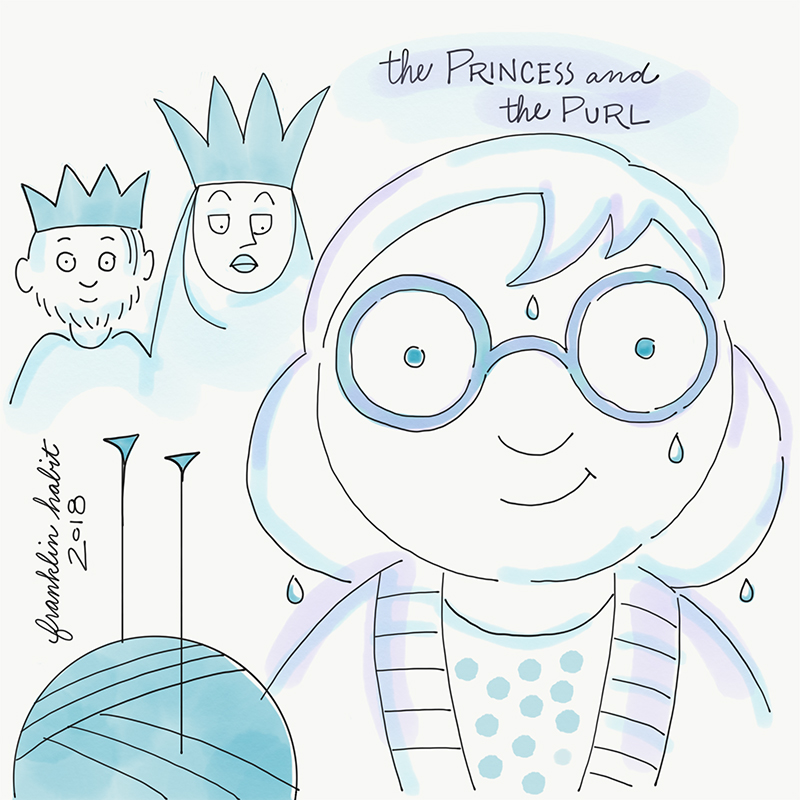 The Princess & the Purl: Ply the First

There was once a prince–nice enough, if not exactly charming–who was in need of a wife.

As he was both a prince (as I have said) and nice enough (as I have also said), more than a few would-be brides came to the palace to present themselves for his consideration. Most were beautiful or clever, or cleverly beautiful, or beautifully clever; yet all were turned away, disappointed.

Word began to circulate that the Prince would never marry. It was said he was too fussy, and had sent away Princess X because the curl of her hair was insincere. Princess Y, they said, was rejected because her laugh was like the cry of an out-of-tune peacock. Princess Z, worst of all, had fallen sound asleep while the prince read aloud from one of his unfinished graphic novels.

These were half-truths. The Prince had indeed rejected these ladies, but only at the insistence of his mother, the Queen. The Prince would have taken any of them, if only to have the thing managed so that he might get back to his drawing board. The Queen, however, was determined that her future daughter-in-law should be above all delicate. She flatly refused to consider any candidate who openly employed curling tongs, or laughed too loudly, or snored in the drawing room.

“To be fair, mother,” said the Prince, “my graphic novels are badly in need of a professional editor.”

“Nonsense, my darling,” said the Queen. “Everything about you is exactly as it ought to be. I have seen to that. It is these indelicate, honking modern girls who lack breeding. Who lack–what is the word I want? Who lack delicacy.”

So things continued, until a stormy night when the royal dinner was disturbed by a pounding at the castle door.

“How indelicate,” said the Queen, “to pay a call at this hour. Guard, send whoever it may be away with a smack on the ear.”

The guard had opened the door only a sliver when a tremendous gust of wind blew a sopping young woman right into the middle of the room. After wringing out the hem of her wool cardigan and wiping her glasses on the sleeve, she curtseyed to the Queen and said,

“Please forgive me for interrupting you at table. I was caught in the gale and blown for some distance before I landed. I find I am miles and miles from home, and hope I might sit near the fire until the rain passes.”

The Queen was affronted.

“And to ask this,” said the Queen, “you dare pound at our front door? Could you not have asked properly, at the servants’ entrance? Then, at least, you would not have dripped on such a very expensive carpet.”

“Hand-knotted, isn’t it?” said the young woman, peering through her smudged glasses.

“That is immaterial,” said the Queen.

“I do beg your pardon, Your Majesty,” said the young woman. “I thought I might knock at the front door as I’m a princess, myself.”

The Queen stifled a giggle.

“A princess,” she said. “You? A princess? In those shoes and that cardigan? Carrying that bag?”

The young woman replied calmly, “Again, I beg Your Majesty’s pardon. My shoes I cannot defend. But the cardigan is my own creation; and my bag, though unfashionable, is full of useful and diverting needlework.”

“What sort of needlework?” said the Queen.

Now, the Queen was herself a devoted knitter who had learned the art at a tender age. Her skill with needles (and, indeed, with hooks and shuttles) was a cherished facet of her delicacy. She felt inclined to know more about this young woman, but there was the matter of the carpet to consider as well.

“Princess or no,” said the Queen, “you may dry yourself and your clothes under our roof. Indeed, I think you must stay with us until the tempest wanes and we can set you back on your homeward path. It would be indelicate to turn you out on such a night. I shall have one of our maids escort you to a chamber where you may…well…where you may do the best you can with what you have.”

So the young woman was led away, trailed by a footman with a mop.

“She seems nice,” said the Prince.

“I shall be the judge of that,” said the Queen. “Eat your peas.”

The Second Ply Will Appear in One Month